This is a guest post by LabellaNotte who is co-GM of the Guardians of Fellowship (US The Scryers – Alliance) and author of the Heals Or Leaf blog.
When you hear the Doomsday Clock ticking, it’s easy to despair.  It’s easy to give up and take what you think is coming to you.  You can sink into depression thinking that all you and your officers have worked for is going the way of the dodo.  If this makes you feel like you’ve fallen in a well with no way out, let me assure you there is a way.
Be an ass.
No, not like your raid leader, this is a different kind of ass. Let me paraphrase a little fable for you.
There was this donkey. We’ll call the donkey Bob. He worked hard and took pride in his work. One day, in a fit of overzealousness, he fell into a hole being dug for a well. 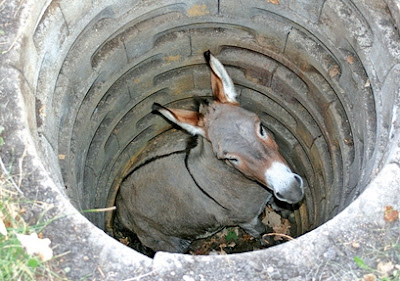 Standing there alone in the well, Bob stared up and wondered what to do next. One of his buddies peered over the edge and told him that he was stuck in a well with no escape. In the process, he sent a cascade of dirt down on poor Bob’s head. A little annoyed, Bob shook the dirt off his back and stepped on it. It seemed he would never get out.
While he stood there, Bob realized he had two choices. First, he could simply wallow in misery over his certain demise.  Or, he could do something to change his situation.
Time and again, other animals came to look, comment, jeer, heckle, or offer helpful advice.  Over and over, showers of dirt fell on him. Bob made his choice, time and again.  Shake the dirt off, step on it, and realize that each bit that fell on top of him could be shaken off, stepped on, and used to bring him closer to freedom.
It wasn’t a fast process by any means, but Bob built himself a ramp out of that well and again got to see the light of day as a free donkey. One shake and step at a time, Bob repeatedly chose to use that dirt to his advantage to build a ramp instead of letting it bury him.

The seemingly endless task of running a guild, whether as a GM or an officer, involves running into obstacles.  Some obstacles are small, such as picking dates for events that aren’t convenient for everyone who wants to participate. Others are potential catastrophes. My guild, just like anyone’s, has had more than our fair share of them.  Looking back at the annals of our history, it amazes me that we have lasted as long as we have.
Back in Wrath of the Lich King, one of our officers left and half the raid team followed. In the same era, our OT’s wife got fed up with his gaming and forced him to quit raiding with us.  During Cataclysm we absorbed another Guild that was falling apart to benefit both Guilds, but eventually there was a rift in our own Guild that led to an officer, one of our best DPS raiders, and several awesome social members away. Also in Cataclysm, one of our other top DPS raiders decided he has finished the story and canceled his subscription. Just recently, one of our most consistent raiders (an officer to boot) and a backup healer decided to leave the server for greener grasses.
Each of these events made us in guild leadership look around and wonder if we could handle this blow.  We wondered if we would survive, no less continue with our regularly scheduled raids.  It wasn’t easy, not by any measure of the imagination.  Each time, we made the conscious decision to keep on trucking.
Matticus very aptly observed that each guild has its own Doomsday Clock ticking towards midnight.  There are outside influences that can stop, slow down, or even reverse it. You can look to those exterior forces he discussed to keep you afloat.  One factor he failed to mention is you do have one other option.  You can draw from your own strength and ingenuity to get yourself out of that hole. 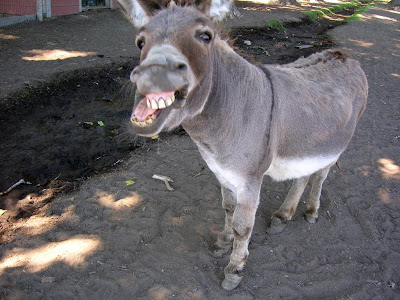 Each time we’ve been faced with a challenge that could have ended us, our GM and officers have sat and stared at the hands of the doomsday clock speeding towards midnight. And each time, our GM, myself, and our leadership team have stopped, shaken off the dirt of the latest disaster, and built a ramp to get out of the hole.  We see and hear the clock ticking and watched the progress of those numbers slow, halt and reverse.
So next time that clock is ticking, think of Bob. Go ahead and be an ass, just like Bob, and you too can smile as the hands on that doomsday clock start to move backwards.
Have you watched your own guild’s doomsday clock ticking away and survived to tell the tale?  Share your experience in the comments!Until next time, long days, pleasant nights and happy raiding.

2 thoughts on “Guest Post: It’s Okay to be an Ass”