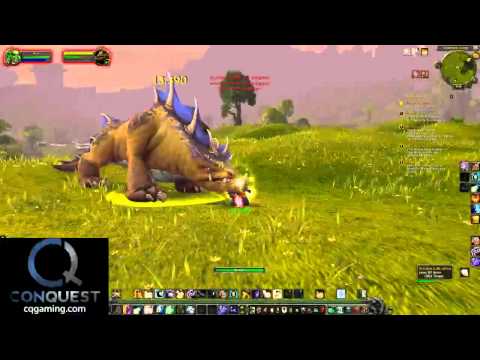 Spectral Guise is the current spell all Priests gain at . as a talent at level 60.

Your shadow blurs into the darkness, leaving your true form behind. As a shadow you are invisible, but remain in combat. Lasts 6 sec or until your true form is hit by 3 direct attacks.0

It seems much more suited towards PvP action than anything else. I can see it coming in handy for PvE stuff while you’re questing or if you’re one of the few people left alive in engagement.

What would help improve this illusion is if my clone taunted or if it casted a placebo spell dependant on my spec (Flash Healfor 0 or Mind Flay for 0).

What do you think of Spectral Guise? Something you’d use?

Since the level cap has been raised to level 87 on the beta, Druids now have access to their level 87 spell, Symbiosis. This is one of the more popular abilities in the game because it’s one of those things where every class has a vested interest in it.

What Druids get from Symbiosis

I did my best to cross reference spells and abilities in the WoWHead Mists database. Certain spells that had key words like “Energy” instead of a different form of energy used naturally by the class and spec, “Druid” or included certain Druid abilities like Rip are almost guaranteed to be the Druid form. Another dead giveaway is the level when the ability is gained (it should say 87). However, Not every ability lists that. In the event of inconsistencies, I deferred to the MMO Champion list as it’s the most recently updated.

What you get from Symbiosis

* Speculation based on tooltips. Savage Defense costs 3 Chi. Chi is Monk only energy.
Wrath is listed as a Symbiosis spell but is not attached to a class.

I don’t even want to think about how they plan to balance this ability for arena usage. I wouldn’t be surprised if they just disable it entirely, but I’m sure they’ll give it a spirited attempt anyway. The main purpose of Symbiosis is to give classes and specs certain abilities that they otherwise wouldn’t have access to. Mages get a Heal, for example.

Shadow Priests with Tranquility is pretty darn nice. Part of me wishes Holy Priests had it, but the other (sane) part of me knows that if that were to happen, Priests would instantly jump to the top. Divine Hymn/Power Word: Barrier and a Tranquility would be blatantly overpowered.

Wasn’t expecting DPS Shaman to receive Solar Beam, but since they’re all with the elements and stuff, I can see why.

Curious with the Balance Druids receiving Mass Dispel. Though it could be used as a more offensive ability since you don’t really see Balance Druids whipping out debuff removals as much.

If you notice a spell that’s in the wrong spot or if an ability’s missed, let me know but make sure you toss in a source (Screenshow, WoWhead link, or something).

Let’s assume you’re a Druid in a raid group with every conceivable class and spec compositions (Let’s say science is thrown out the window and the raid limits are higher than 25). Who do you give Symbiosis to and why?